While I’m used to not going home for Thanksgiving (DC to Seattle is a long and expensive plane ride for just a few days), there’s something about being in China for Thanksgiving that makes you miss home. Almost everyone in China has heard of Thanksgiving, or Gananjie as they call it in Chinese, but most people don’t know anything about it besides “Turkey!!!”. As the seasons started to change, I suddenly wished for all of the fall things I took for granted back home. I wanted to import evergreen and pumpkin spice candles, I wanted to eat and drink pumpkin everything, and above all, I wanted an oven.

I never realized how many Thanksgiving foods are made with an oven until I moved to a country that doesn’t use them. If you think of a typical Thanksgiving meal, literally everything is made with an oven except maybe mashed potatoes and canned cranberry sauce. Above all, I just really wanted to make some pumpkin pie, but with no pureed pumpkin, evaporated milk, nutmeg and ovens, it’s basically impossible. So what’s a foreigner to do during Thanksgiving? Go to Shanghai of course! 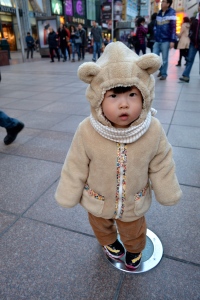 After teaching all of my classes about Thanksgiving for a week straight, I headed out early Friday morning to catch a train to Shanghai. After a quick two-hour train, we arrived in Shanghai and took the subway to our hostel near East Nanjing street, a huge shopping area. There were 12 of us, staying at two hostels near each other. I had a very cozy three-person room with two of the other teachers. I was shocked that the hostel provided towels and had mattresses!!! I was also impressed by the hot showers with decent water pressure. After staying in hostels in Western China, I forgot what it was like to stay at a cheap hostel on the East Coast! For only $17 a night I was in heaven. 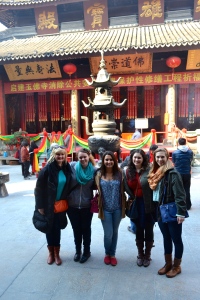 Wandering around East Nanjing street made me realize how rough I have it in the middle of nowhere. While I like my school and my apartment (for the most part), I miss living in the city and being able to walk or take the subway wherever I want to go, I miss being able to meet new people and make plans last-minute because I don’t have to worry about bus schedules or shelling out $10 USD for a taxi one way. Above all, I miss having friends to hang out with and talk to every day.

Overall, Shanghai was great. A group of us went out for real Mexican food the first night which was AMAZING. We split a huge plate of Nachos and I had a plate of spicy pork soft tacos with a towering margarita. On Saturday we went to a Buddhist temple famous for its large jade Buddha. While I’m a little “templed out” after Tibet, the jade Buddha was pretty impressive. The temple was also having a celebration for the temple donors, which we got to see. There was a large procession of all of the temple staff in yellow, followed by the donors in black. We stayed for about a half an hour, but eventually left when we realized the celebration would last another four hours.

Saturday night, the group of us all went out to STUBBS BBQ, a Texas BBQ restaurant from Austin. I ended up getting the “Thanksgiving Dinner” plate that came with Turkey, mashed potatoes, sweet potatoes and stuffing, complete with a glass of wine and pecan pie! Others opted for staples like bacon mac and cheese or pulled pork sandwiches. Overall, it was great to have some comfort food right around Thanksgiving. 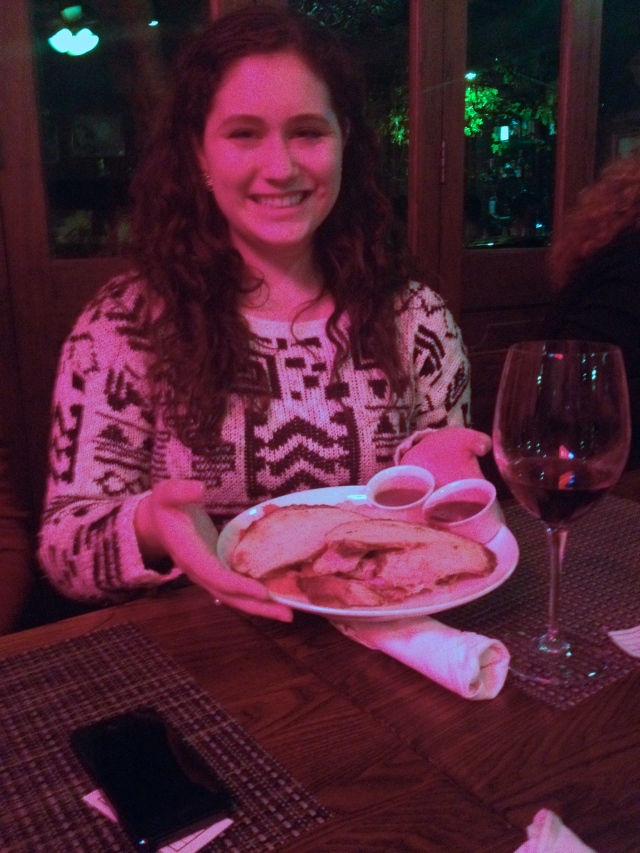 That night we went to Perrys, a Western bar with great drink specials, where we ran into a few other AYC teachers who were also visiting Shanghai for the weekend. They took us to an amazing club that played a lot of great music, and the group of us had a really fun night. 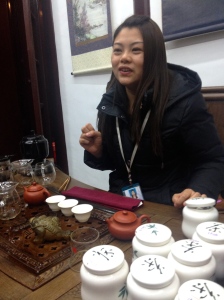 On the last day, most of the group opted to leave pretty early, but I wanted to milk my time in Shanghai so I decided to stay until the afternoon. A few people were taking a later train home, so we went to the Yu Yuan gardens together. While I had already been to the gardens in the summer, it was nice to see them in the fall, with the trees changing colors. It was also much less crowded. While we were in the gardens, we were invited to a free tea tasting (with the hope that you’ll buy some of the tea afterwards). We all sat huddled around a large oak table, tasting different teas, which I might have bought had I not been short on money.

We headed back to the train station in the last afternoon, but only after eating the most famous soup dumplings in all of China! Unfortunately, I wasn’t able to get a train out until 8pm, which meant that I would miss the last bus home. I was a little worried that I didn’t have enough cash for a cab home, and I couldn’t withdraw more because my bank, Yinzhou Bank, doesn’t exist in Shanghai.

My school has a partnership with Yinzhou Bank, which means that they will only send my salary to this bank. Yinzhou Bank only exists in Ningbo, and it is literally the most “backwards” bank I have ever seen. I’m the only foreigner they’ve ever served, so I had to go to the bank four times because my name wouldn’t work in their system. I now go by just “Richelle” for all official documents… Kind of like Madonna or Beyonce. Instead of having a normal debit card like all other banks, I have a “little red book” where my money is stored. If I want to get money out of my account, I can either take the book into the bank for cash, or I can tell the bank to take money off of my book and put into onto my debit card. My debit card is not attached to my account for some unknown reason. Why not just put all of the money on my debit card? WELL the debit card works at grocery stores, chain restaurants like McDonalds, and certain shops. China is slowly transitioning from a cash-only society to one that takes debit cards. BUT if I want to buy something online, I have to use the red book. To make things more confusing, my debit card has two accounts: one is the normal account and the other acts as my school meal card. If I want to put money on the school account, I have to take it to a machine on campus and transfer it over. So now my money is in four places: cash, red book, debit card and meal account. SO CONFUSING!

While this all isn’t normally a problem in Ningbo, it is when I travel. On the last day I realized that I didn’t have enough cash, and I had no way to get more. There was only 100 kuai on my debit card, which is the minimum to withdraw. Since there are no Yinzhou bank ATMs in Shanghai, I have to pay a fee to withdraw… but I didn’t have enough money on my card to withdraw 100 kuai AND pay the fee. Crap!! I asked around the train station, hoping there would be a credit card ATM.. nope. I asked if there was any place that would do “cash back” on a debit card if I bought something… apparently that hasn’t made it to China yet. So I ended up using my debit card to buy dinner, and I took a cab home knowing I wouldn’t have enough money to pay my driver. Once we got to the school, I explained to the driver that I didn’t have enough money to pay him, but that I had more cash in my apartment. When I asked the guard if the cab could drive us into the school so that I could get more money to pay the cab driver, the guard simply handed the driver the 10 kuai I was short. I thanked him profusely, and promised to pay him back the next day. After this fiasco I definitely learned my lesson, and immediately put 2,000 kuai on my debit card as soon as I had time to go to the bank.

Overall, I had a great Thanksgiving. While I was completely exhausted when I returned back to campus at 11pm and had to teach the next morning, I had a great weekend with all of my friends, and I got to bring a little bit of America to China for a weekend.

Since I’ve used up a lot my allotted photo data space, I created another blog to post photo galleries (yay loopholes!). So….

CLICK HERE TO SEE THE REST OF MY THANKSGIVING PHOTOS!

1 Response to Thanksgiving in China