A Piece of History: Our Day in Dazu 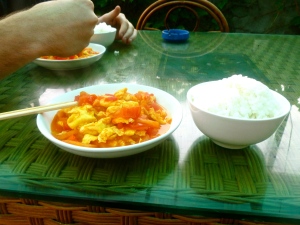 On the third day we woke up at the crack of dawn (aka 7) to go on a tour of the Dazu caves. Our hostel had booked the tour the night before and we were to be picked up at 7. We ate an interesting breakfast at the hostel, tomatoes with scrambled eggs (yes, we ate tomatoes with some scrambled eggs thrown in there) and a bowl of rice. Not what we thought we were ordering, but that’s okay. We waited for our bus for about 15 minutes before realizing there must be a problem. Nate ran downstairs to see if the hostel could call the tour company and apparently, one girl at the hostel had forgotten to call the tour company to tell them we were coming! It all worked out though, and we were eventually picked up.

The bus ride was about two and a half hours and contained two other waiguos- a young English teacher with purple-red hair from Italy, and an older woman from Austria who was visiting a friend in Chongqing. Dazu had been recommended by Lonely Planet and we knew it was something cool with Buddhist statues, but we weren’t exactly sure what it was. After a two hour bus ride we arrived at a temple basically in the middle of nowhere. We drove through a small town with the most construction I have ever seen in my entire life! Close to a hundred high rises were being built around this middle of nowhere town Dazu in anticipation of people moving. This is a prime example of the crazy Chinese economic system: Build it and they will come. There is nothing in Dazu besides the caves and, apparently, construction jobs. It just amazes me that the government can spend all this money on high rises in the middle of nowhere, but can’t afford to help a man bleeding in the middle of the street with a broken bone protruding through his severed leg. I’m going to leave it at “China is a developing country”, and continue on with the story before I make myself, and everyone else, upset again. 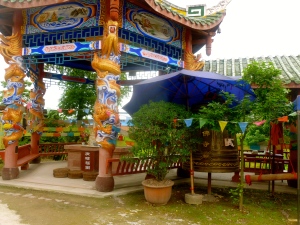 Our bus pulled up to the temple in the middle of nowhere “construction land”, and I was very confused. Weren’t we supposed to be seeing Buddhist statues or something? Nate and I had fun wandering around taking photos of the worn down Buddhist temple, while the Chinese tourists enjoyed a history lesson. I understood parts, like “that statue is her tutor”, “these are her parents”- but the majority was completely unintelligible to me. After the history lesson, we were brought upstairs for another talk with a Buddhist monk- none of which I understood. I also had to sit by myself because there were no more seats together. After his speech he called us up one by one and gave everyone a sheet of paper. When it was my turn he asked “Do you speak Chinese?” in English. I told him some, and instead of a paper he gave me a few sticks of incense “as a gift” and told me I wouldn’t understand… basically whatever people were doing with the papers. When I walked into the next room, there were rows of Chinese people talking with Buddhist monks about their paper. It almost looked like they were getting their fortunes told? I wasn’t sure what I was supposed to do, so I stood there awkwardly until a Chinese woman ushered me out of the room. I stood behind the curtain waiting for Nate and our other new English speaking friends, and we made our way downstairs. Once downstairs an old women had us light our incense and place it inside the temple- Definitely a cool experience. 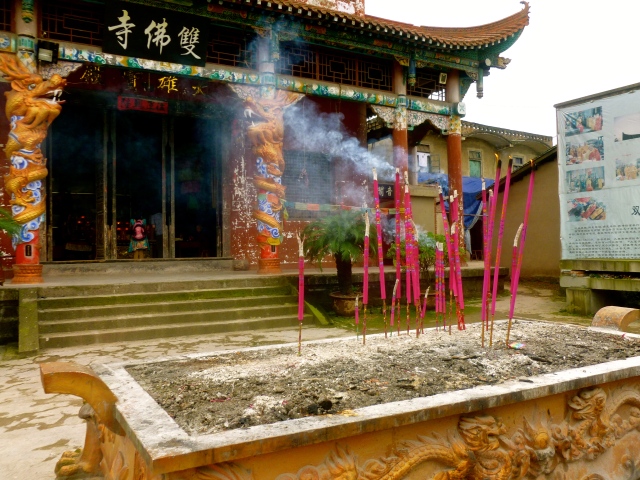 After everyone had their fortunes told, or whatever it was that they were doing, we made our way back on the bus to eat lunch. We drove to a random restaurant in Dazu and our group took over about five large tables. Nate, the other waiguos, and I sat with some Chinese people. A few spoke some English and complimented us on our chopstick skills, telling us that we could pick up “even the smallest things!”. Lunch was pretty interesting, almost every dish besides baicai was new, but I was willing to try everything. After the quickest lunch of my life, we boarded the bus again. 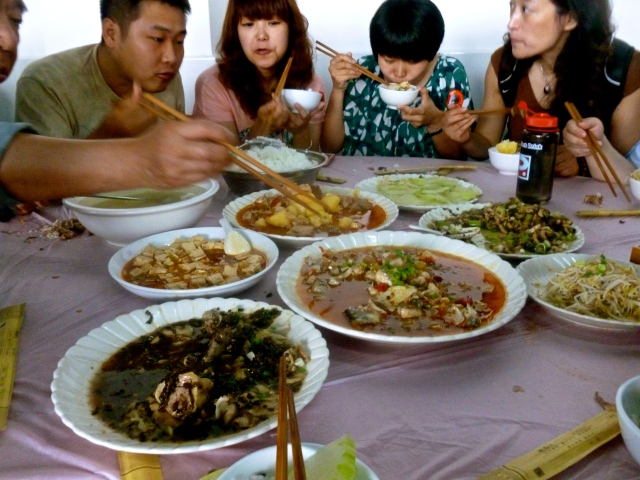 Based off a few photos at the temple, Nate and I assumed we’d be seeing some statues, but we were a little skeptical at this point. We arrived at the park and boarded little trolleys to the park entrance. There, everyone was handed headsets to better listen to the tour guide – except the waiguo ren, “waiguo ren bu yong”- which basically means “international people, can’t use them”. Good. However, we found a pamphlet explaining the caves with English, which told us that they were Tan Dynasty, over 1,200 years old. There are over 100 sites and this site, the most famous, has over 50,000 figures; the most famous being Avalokitesvara, a solid gold goddess with 1007 hands. At first we were a little annoyed that there was no English option, but we soon learned it was a benefit. All of the signs explaining everything were in Chinese and English, which allowed us to wander the area away from the giant crowd. While we may have missed out on some history, we learned enough from the signs. 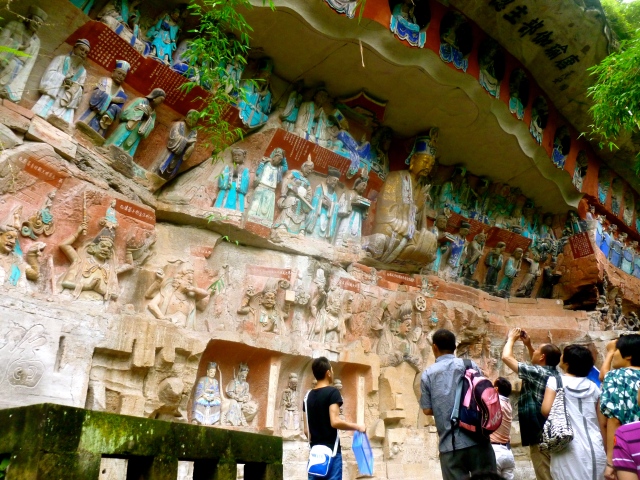 The Dazu figures are absolutely amazing. There are depictions of heaven and hell, a giant reclining Buddha- and everything is almost all intact! While a lot of the color has faded, the statues are almost all perfect. Some of the statues are HUGE, and the work is so intricate. It was definitely worth the trip to see these. Unfortunately the main attraction, Avalokitesvara, was under renovation so she was difficult to see, but everything else was absolutely amazing. One interesting thing was that the local army was also touring that day so there were tons of solders everywhere! 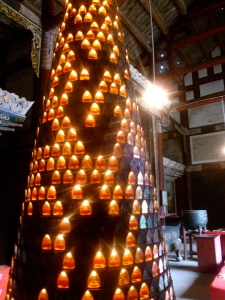 Because we finished early, our main tour guide told us that we could explore a temple just outside the park instead of waiting for the Chinese tourists. If you must know one thing about Nate, he loves temples. So do I, but he has a special appreciation for them. Nate, the Italian girl and I explored the temple, which was mostly under renovation/construction, not unlike everything else here in China. I do love how in Chongqing every temple has not only cats, but also kittens. Nate loves temples, I love kittens- win, win. Probably the coolest aspect of the temple were two large cones in the front room. These cones, almost Christmas tree shaped, contained little tiny compartments with small Buddhas. Some of these Buddhas were lit up, while others were dark, giving the cones a scattered mosaic of light. 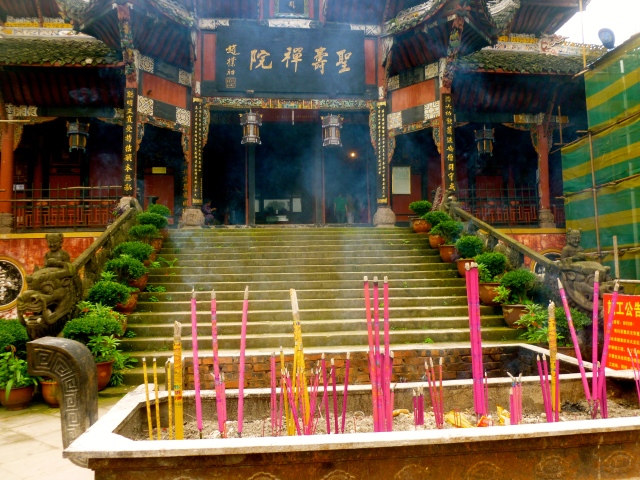 Our last pit stop was the obligatory “we’re going to try and sell you something” stop. I’ve done plenty of these before: jewlery, carpets, etc. etc. but this one was especially interesting; they were selling knives. The woman selling the knives was very charismatic and gave a CUTCO-eqse performance, chopping strips of leather, banging the knives on steel, etc, etc. While the performance was entertaining, 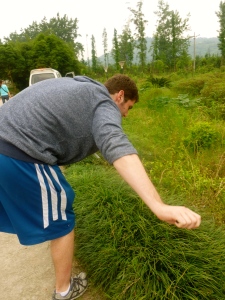 the Chinese tour’s reaction was by far the most interesting. As the woman was wrapping up, the audience burst into lively chatter. “That’s a little rude”, I thought, “at least let her finish speaking before you all start making phone calls”. However, what I didn’t realize was that these people were talking about the knives! As soon as the woman finished the entire tour ran to the podium to purchase their genuine knives. This was the first tour I had ever been on that people actually bought things! We were all given small knives as souvenirs, and Nate had fun cutting the grass while the entire tour purchased their knives. On the bus ride home, all of the males immediately grabbed an empty plastic water bottle and began to cut it open using their souvenir knives; typical. Only in China would they load an entire bus full of knives.

After a two and a half hour bus ride home, Nate and I were exhausted… But not too exhausted to eat my favorite food in China!!! You guessed it, hotpot. We ate hotpot in this cute little yellow restaurant, which also happened to be the loudest restaurant ever. People were literally screaming and men were jokingly fighting one another. When Nate and I sat down, this woman eating hotpot with her daughter who was roughly our age, kept staring and smiling at us. Every time we looked anywhere near her she would make eye contact and smile… a little unsettling, but nice nonetheless. When we received the menu it was only in Chinese- no pictures. We tried listing names of things we wanted, it worked out for the most part but instead of strips of tofu we got large chunks of it, and instead of lotus root we got potato. Close enough right? Everything we ate was absolutely amazing though! We got “not super spicy” broth which was very, very spicy- but still edible! The only problem was when the mouth-numbing peppercorns became hidden in 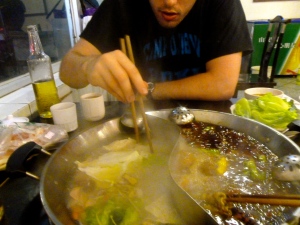 your baicai- let’s just say my mouth was completely numb by the time we left. Even the non-spicy broth was so good! It had my favorite golden mushrooms (YES I found more mushrooms I like, Dad), carrots, chicken bones and other interesting objects to flavor it. The most interesting part was the dipping sauce. It was some sort of oil with garlic. The oil somehow not only enhanced the flavor, it also made the food cool enough to eat right away! AMAZING. I LOVE HOTPOOOOOOOOOT. I only wish Nate loved it as much as I do. The only thing Nate and I are not on the same page about on this trip is the amount of hotpot we want to eat. I’m officially starting an authentic hotpot restaurant in the United States…. Right next to my Korean Cat Café.

Expat, traveler, and spicy food lover, I currently live in China where I'm studying for my master's degree!
View all posts by Richelle →
This entry was posted in Uncategorized. Bookmark the permalink.

5 Responses to A Piece of History: Our Day in Dazu